June Heat in Colorado - Why Is It so Hot?
Disclaimer: This draft is an evolving research assessment and not a final report. The analyses presented have not yet been peer reviewed and do not represent official positions of ESRL, NOAA, or DOC. Comments are welcome. For more information, contact Dr. Martin Hoerling (martin.hoerling@noaa.gov)

A string of record breaking maximum temperatures and numerous fires and almost no precipitation in Colorado during the month of June 2012 had people wondering - What's up with the weather? For example Boulder, Colorado had the hottest average maximum temperature (91.2° F) for the month of June. The period from March to June was the driest in the city's weather records dating back to 1894. Is this natural variation? Is it climate change? Has this happened before? The pages below give some background information to help answer these questions. 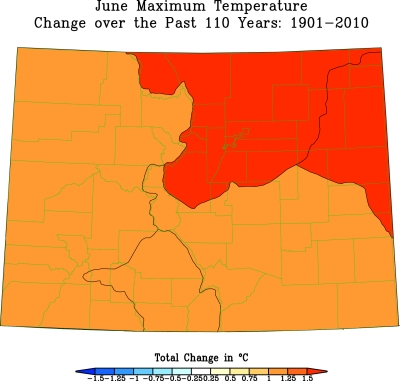 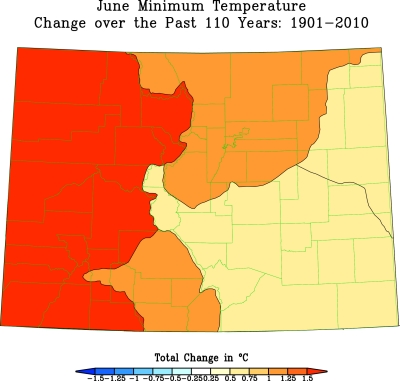 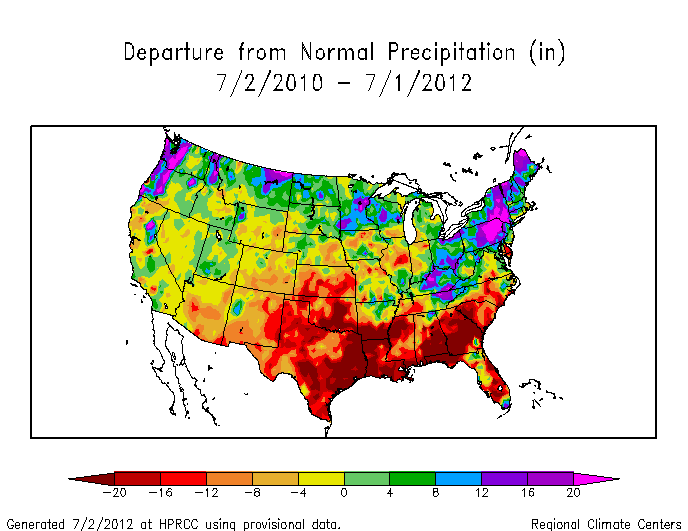 Precipitation departure from normal over Colorado from January to June, 2012. (Source: Western Regional Climate Center)
Is there an historical analog?
In 1956, Colorado experienced a dry spring and a hot June. This was also a La Niña year as was the case in 2012 until late spring. The maps below compare the patterns of 1956 to those in 2012. These maps show a similar story in terms of circulation patterns and their effects.
Temperature 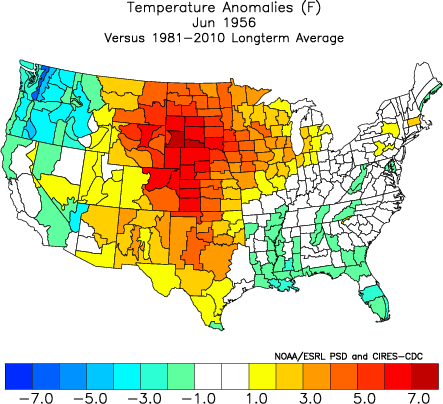 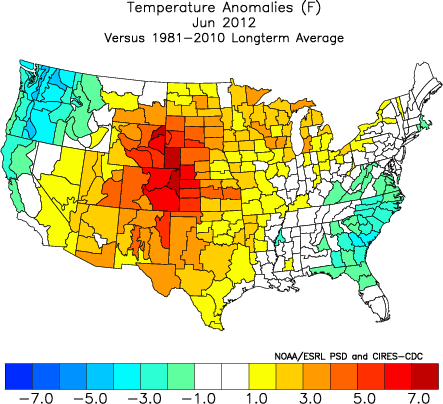 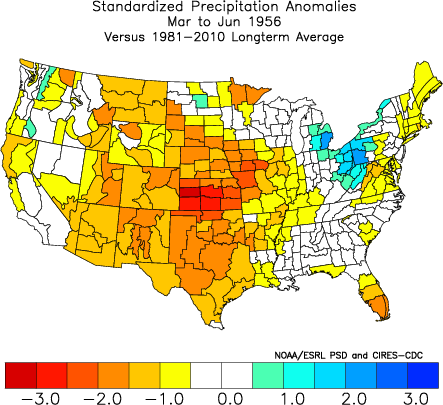 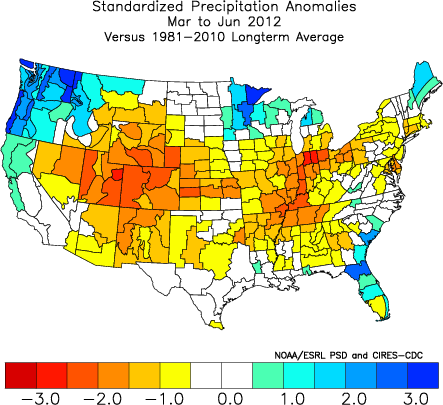 May-June 2012 500 hPa heights
Fires in Colorado
On June 26, 2012, lightning sparked the Flagstaff Fire above the NOAA building in Boulder, CO. The timelapse video below was taken by Dustin Henderlon shows the view from Boulder from 3 pm, June 26 to 10 am June 28th. The fires in Colorado and elsewhere in the US have people asking what is causing this and is this more extreme than usual? A good discussion on some of the factors leading to the large loss of property and 3 lives is here: Red Zone: Colorado’s Growing Wildfire Danger
How does this compare to the historical record
According to the National Interagency Fire Center, through July 3, the acreage burned and number of fires are This compares to the average over the period available 2003-2012 So far this year, the U.S is slightly below average for acreage and considerably below average for number of fires. To compare with a relatively bad year over this short period, 2006 had In this 10-year record, on a most-to-least scale, so far 2012 ranks fourth out of ten for acres burned and ninth out of ten for number of fires. So while CO has experience severe fire loss, the US fire season as a whole has not been exceptional to date. A recent web chat was held between weather and climate experts and communicators (including Marty Hoerling from NOAA/ESRL/PSD) on the fires and other extreme events of June. The video below provides more information on the possible causes of these events:
Other links of interest
Politics of Fire and Ice by Chris Mooney Andy Revkin's Dot Earth blog
Given the trends of warmer temperatures and the 2012 drought conditions in Colorado, one might ask: The charts below compare the observed trends of March-April-May (MAM) temperature and precipitation to two different model systems. These box and whisker plots show the observed values (green dot) compared to the range of values from the model ensembles. The range is denoted by the line (whisker) between the maximum (red asterisk) and the minimum (blue asterisk). The bottom and top of the box are the 25th and 75th percentile (the lower and upper quartiles, respectively), and the band near the middle of the box is the 50th percentile (the median). In each of the plots, the top half shows the temperature comparison and the bottom half shows the precipitation comparison.
Observed vs. CMIP5
The CMIP5 (Coupled Model Intercomparison Project Phase 5) dataset is a set of coordinated model experiments from 20 climate modelling groups around the world. This ensemble of different solutions can be used to examine the observed change in temperature with model simulations that include forcings due to increasing CO2. In the plot below, the observed temperature trend aligns with the rise in temperature due to human-induced forcings. However, the observed change in precipitation (drying) is not well simulated by the CMIP5 model runs. 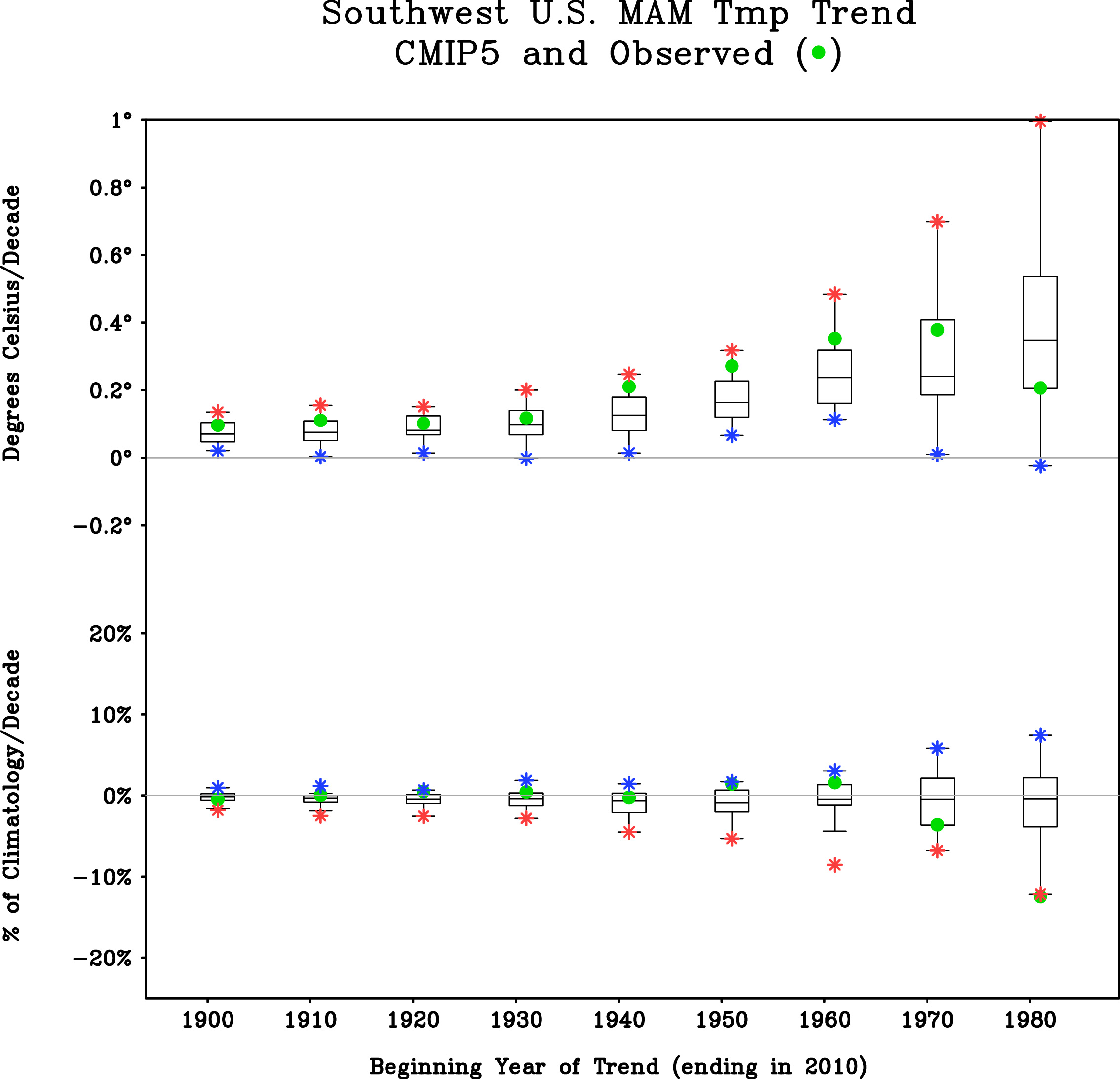 Observed vs. AMIP
The AMIP (Atmospheric Model Intercomparison Project) is a standard experimental protocol for global atmospheric general circulation models (AGCMs). The AGCMs are constrained by realistic sea surface temperature and sea ice so the output is forced by ocean surface processes instead of greenhouse gasses. In the plot below, the precipitation much more closely matches the AMIP solutions, indicating that the primary driving force of the reduced precipitation is a natural variation of the ocean related to El Niño/La Niña cycles. 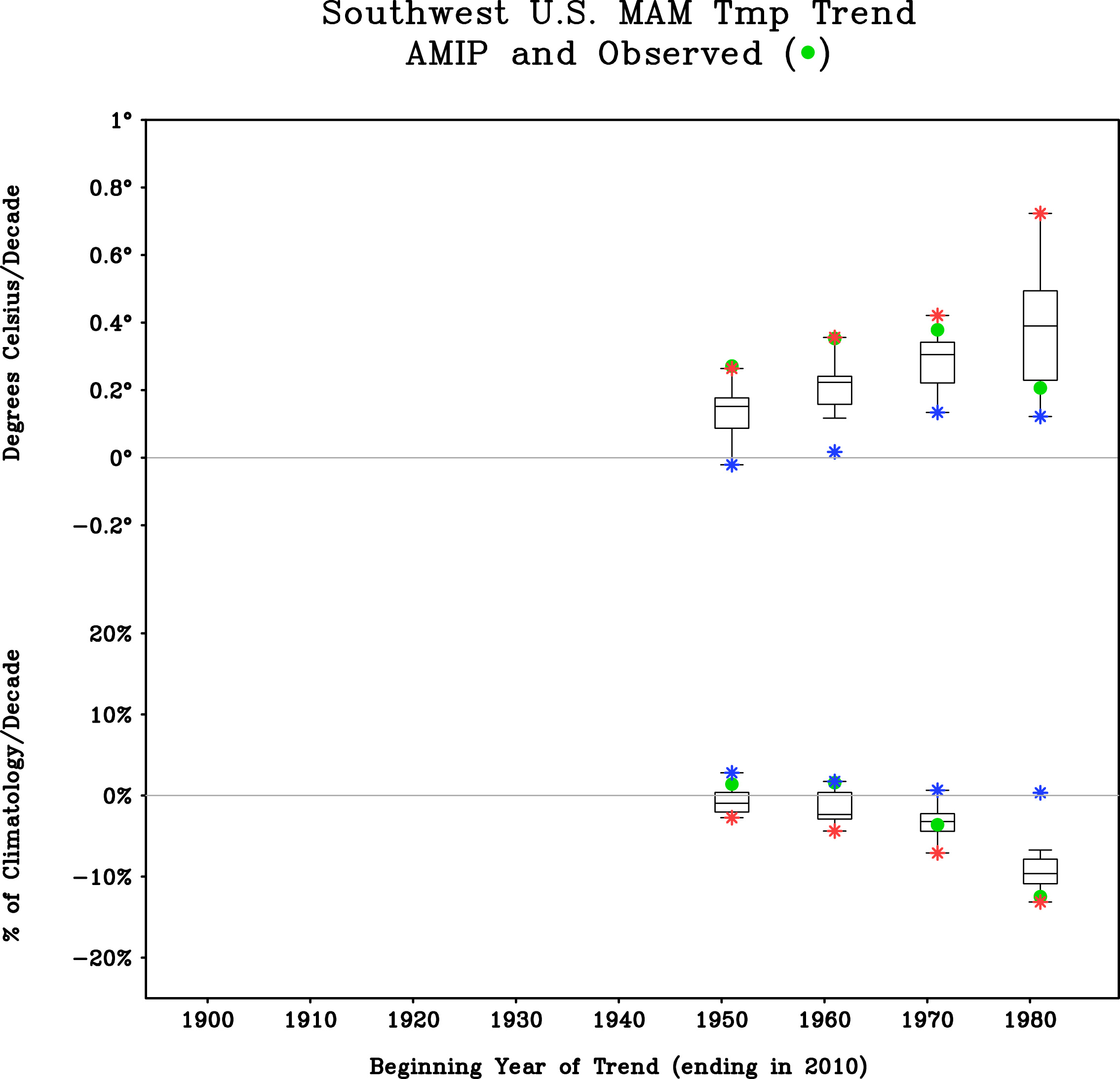